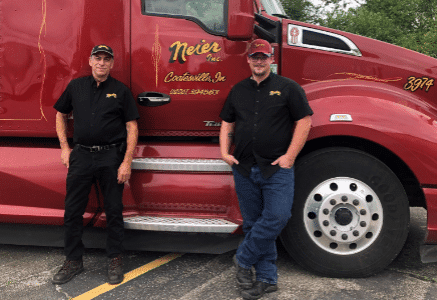 Kurtus H came to Neier as an OTR Company Driver. He settled in as one of the team very quickly and was excited to accept new challenges and responsibility. Shortly after starting with Neier he received additional training to operate Vac equipment, allowing him to run specialty loads for Neier. Around a year into his career with Neier, he informed us that he had dreams of starting Neier’s first team operation. Kurtus presented his idea to Dispatch and Human Resources, and ensured them that he had the perfect recruit for this team operation, Paul S.

While talking to Paul, it became apparent that this was an opportunity that Neier could not pass up. Paul was excited about the opportunity of growing not only his career personally, but growing Neier as well. Kurtus and Paul represent core company values. They operate with integrity each and every day, have an excellent record of customer satisfaction, and a commitment to safety. Kurtus and Paul successfully turn over 6,000 miles weekly, allowing Neier to service more customer loads. Their commitment to success and optimistic attitudes makes working with Kurtus and Paul a pleasure.

What is it that you feel sets Neier apart from other companies?

How would you describe the Neier atmosphere?

What would you like new hires to know about Neier?

How has being part of the Neier family positively impacted your life?